How do you feel about paying for war through your taxes?

Do you deeply object to being made to participate in killing other people?

Would you rather see your money spent on peace building initiatives? 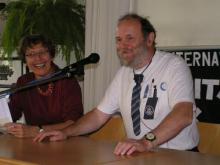 CPTI is an international peace movement focussed on "Taxes for peace not war," seeking to direct taxes away from preparation for war and towards peace building.

Our mission arises from the deep affront to our con­sciences that people are made to partici­pate in war as combatants, civilian victims and through taxation. We are also moved by the common sense proposition that our taxes should be used to abolish war, not promote it.

The ethical principle of freedom of conscience, a moral imperative governing the behaviour of an individual, is central to the objectives and work of CPTI.

CPTI aims to win recognition of the right to con­scientious objection to paying for armaments, war preparation and war conduct through taxes.

CPTI also upholds the right of conscientious objection to military service and supports all war resisters.

CPTI supports and links the work of the many national and regional war tax resistance and peace tax campaigns. Visit our Global War Tax Resistance page for more information about the many other organisations around the world.

CPTI is constituted as a company (new window) under English law and is a non-governmental organisation (NGO) in special consultative status with the Economic and Social Council (ECOSOC) (new window) of the United Nations.

What We Are Doing

We are a central point of reference for WTR and PTC around the world and one of the means by which national campaigns communicate with one another and coordinate international action. Visit our National War Tax Resistance and Peace Tax Campaigns page to find an organisation near you.

How You Can Help

CPTI needs supporters, because the more of us there are, the more we can impress officials in the UN and national governments with our constitu­ency.

New Bill in the USA

On 19th July 2021, one year after the death of Rep John Lewis, Representative Jim McGovern of Massachussetts became the new sponsor for the Religious Freedom Peace Tax Bill.  For more details go to https://peacetaxfund.org/about-the-bill/

took place in Edinburgh, Scotland from 30th November to 2nd December 2019, with twenty participants from six countries.  The weekend also included a visit of support to the "peace camp" at the gates of the Faslane nuclear submarine base. Potted history of CPTI up to and beyond Edinburgh.

For many years, Congressman John Lewis of Georgia, a distinguished veteran of the Civil Rights movement, had been peace tax's biggest friend in Washington.  In Congress after Congress he brought forward bills, most recently in 2011 (see below)

The 2016 Bill https://conscienceonline.org.uk/our-previous-work/new-taxes-for-peace-draft-bill/ ran out of time; Conscience, the UK campaign, now plans to introduce a new Bi

A hundred years after conscientious objection to military service was legalised in the UK, a Bill to extend the right into the tax system is being introduced in Parliament by Ruth Cadbury MP, whose Cadbury and Rowntree grandfathers were both conscientious obbjectors in the 1914-18 War.  For more details go to

Roy took over from Dirk as Secretary.  A freelance accountant, who with Robin Brookes had been a member of the Peacetay Seven, he handled the move of CPTI's registered address to England.  In June 2016 he called on a client, by cycle as usual, and collapsed and died on announcing himself at reception,  He was only 64.

Dirk was the first Secretary of CPTI, and itsregistered address until 2014 was at his home in Leuven, Belgium.  He retired after the 2014 Bogota Conference, but it was to everyone's surprise that he sadly died later that year.

Marian Franz (1930 - 2013), Pedro's predecessor as CPTI President, was for many years a tireless campaigner with the National Campaign for a Peace Tax Fund in the United States, see "A Persistent Voice", Cascadia, Telford PA, 2009, a collection of her writings edited by David Bassett, Stever Ratzlaff and Tim Godshall.  Earlier,she and her husband Delton, a baptist minister, had

CPTI Documents Submitted to the UN Since 2001

Complete listing: Links to the actual documents are on the CPTI Statements to the United Nations page.

Recent submissions: Oral Statement by CPTI to the 12th Session of the Human Rights Council, 18 September 2009

CPTI Submissions to the 6th Session of the UPR Working Group, December 2009: Cyprus and Eritrea

CPTI Submission to the 5th Session of the UPR Working Group, April 2009: Chile